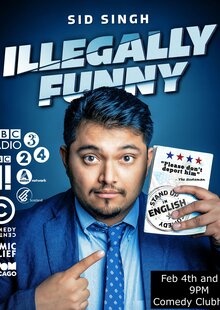 What happens when a human rights lawyer, an illegal immigrant, and a comedian are all the same person! Come watch Sid Singh's brand new hour of stand up ILLEGALLY FUNNY to find out all this and more! Not only will Sid make you laugh, but by the end he'll also teach you how to deal with conspiracy theorists and create the greatest conspiracy of all: how to get his audience to hack the US Supreme Court!

Hailing from the Bay Area, California, Sid Singh is an accomplished stand up comedian and writer whose work has appeared on BBC's Muzlamic, Comedy Central UK's Modern Horror Stories, BBC3's Comedy Shorts, Comic Relief and more! In addition, he was a cast member at the famed Boom Chicago theatre in Amsterdam where he wrote and starred in their show The Future Is Here.

In 2019 his Edinburgh Fringe Show American Refugee was listed as one of just four Free Shows to Watch by The Scotsman who stated that "This is a game-changer of a show, or at least it should be, because playing the game Sid's way, you get the feeling that your chances of winning are exponentially increased. " and Radio Haha which stated: "His coolness on stage is remnant of that of Dave Chappelle, whilst his level-headed demeanour is likened to late-night talk show hosts like Trevor Noah and Stephen Colbert. How is this guy not bigger than he currently is?"

Sid has since toured the show around America and Europe headlining theatre shows in New York, Berlin, London, Amsterdam, Vienna, Prague, Barcelona and more as a result! In addition, his debut comedy album Amazing! Probably reached number 3 on the iTunes comedy chart and can still be streamed on all major platforms today!