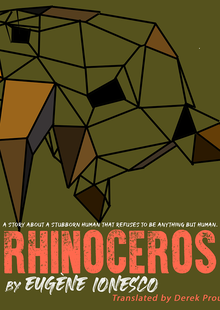 Rhinoceros begins in a small town square where Jean, an efficient, refined young man, meets his semi-alcoholic and fully apathetic friend, Berenger, for a drink. Jean upbraids Berenger for his drinking habits and his aimlessness. Soon, a rhinoceros runs through the square (off-stage), shocking all the townspeople with the exception of the indifferent Berenger. Jean lectures Berenger about will-power while a rational Logician explains the concept of a syllogism to an old man. Berenger concedes that he has a crush on Daisy, a typist at his office, but worries that she favors Dudard, an up-and-coming co-worker. Jean recommends will-power and cultural self- improvement to garner Daisy's affections, and to improve his life in general. Another rhino rushes by and tramples a cat. The townspeople debate whether or not it was the same rhino and what breed it was. Berenger and Jean get in a fight over the physical specifics of the rhino, and Jean storms off after calling Berenger a drunkard. The townspeople ask the Logician to clear up confusion, but his lengthy analysis makes no progress. The townspeople vow to stop the rhinos. Berenger expresses remorse for fighting with Jean, then says he's too upset to culture himself as planned and instead drinks.

Review
My family and I have really enjoyed the show, and are happy we could see this amazing performance live. Hope we'll be able to see more of your performances in the future!
Family Logar
Impresionante
I really enjoyed myself
Petra

Details
We and our partners use our own and third-party cookies in order to offer you the service in a correct way, measure the visits made to our website and, in specific cases, show you advertising and allow you to share content on social networks. You can obtain more information about cookies by consulting our Cookies Policy. To continue browsing you must accept all of them or you can rechazar aquí measurement and marketing cookies.
Refuse